What is Aesthetic Distance?  According to the Encyclopedia Britannica, it is defined, in part, as: “the frame of reference that an artist creates by the use of technical devices in and around the work of art to differentiate it psychologically from reality.”  I find the implementation of devices to establish aesthetic distance by contemporary artists to be at times poetic, but then at other times, self-defeating, particularly when what one is being distanced from is especially reliant on an emotional connection to the viewer for full impact.  This is the sort of thing I wish to address here.   I imagine Aesthetic Distance will become a feature on this blog where I diverge from the review format for a more theoretical or social look at the overall themes presented in a particular work or by a particular artist.

My focus today will be Amar Kanwar’s Torn First Pages, 2004-08,  which I had an opportunity to view at the Guggenheim museum in early-March. The press release for the exhibition, entitled Being  Singular  Plural,  can be seen HERE. The work deals directly with the struggles in Burma against the military regime in power there.  Torn First Pages is named in honor of the acts of bookseller Ko Than Htay, who was imprisoned for tearing out the first pages of all books that contained ideological slogans.

Kanwar’s 19-channel video installation documents the ongoing struggle for democracy in Burma as it envelops viewers in multiple spatial, emotional, and temporal zones.  This piece really threw me, it got me thinking about art and representation in a way that only a few have troubled me before. 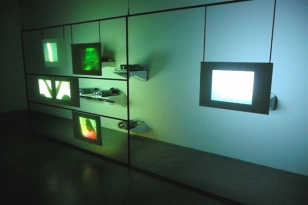 Kanwar spoke about why he created this piece in an interview with Metropolis M:

‘I’m an individual, who is also an artist, who is also a filmmaker. If I think something is happening and I should respond, I do. And if you respond, that means you’re active, but I’m not a professional activist. In the case of Burma, I had many questions. I met some Burmese refugees in New Delhi. When I got to know them better I began to realise, to my shock, how little I knew and what an incredible struggle it was [between the dictatorial regime and the Democracy Movement of Burma ed.] and how many young people, students, generations had gotten involved in it. I was upset about how little I really knew, or understood of one of my neighbouring countries, but was also very much struck by their resilience, by their courage, their sense of humour. So I responded. But it is very difficult to genuinely understand Burma; it’s a highly complicated country, with many ethnic nationalities, each with its own national movements, and a complicated history, which is even difficult to understand for an Indian like me.’

Torn First Pages is both direct and tenuous.  Multi-screen projections are given on hanging sheets of paper from behind.  The effect of viewing the video clips– many of them archival news footage– in this way is particularly thought provoking.  The images themselves are difficult (images of abuse, murder, prisoners and the people who cause those things to happen) but being filtered through the semi-transparent paper softens them by diffusing the focus and blurring the edges.  Low-quality video images so presented take on, dare I say, a warm, painterly quality through the fibers of the papers.  And yet certainly there’s more going on here than an aestheticization of banal media coverage.  Paper is fragile, easily marked, easily destroyed.  Paper(s) define us in government bureaucracies: birth certificates/ death certificates/ school records/ prison records/ credit histories/ licenses/ ID cards…we demonstrate our existence through paper trails.

The work has as one of its major themes a discourse on regimes of media and power, how totalitarian governments control images and words and their dissemination.  Amongst the grouping of images are screens with simple texts, naming people, ages, and their fates when they come into contact with the Burmese military.

The text also repeatedly reminds the viewer “THEY DID NOTHING WRONG” pointing emphasis to the cheap fragility of life under a regime that treats its citizens like disposable objects, like pieces of paper to be crumbled, tossed and burned.

But my real focus in this article is to address the idea of message and effectiveness.  I experienced this piece in a gallery of the Guggenheim museum, the message is clear enough, what I cannot help but ask myself is: now what?  One has the sense that Kanwar is asking himself the same question when he says, “I was upset about how little I really knew…”  It’s a question that I often end up asking about politically-active art.  Is the artist intending to arouse empathy; to call me to action; to accuse or provoke?  And what about after I leave the warm, darkly lit gallery and walk back out onto the main ramp of the Guggenheim, taking comfort in a late 1960s John Chamberlain sculpture that pointedly does not provoke any political outrage in me.

What I got from the work was a lot of nagging questions.  How do I understand or discuss this work without just describing it?  How do I delve into meaning without writing an essay on the history of the Burmese resistance?  Does doing one make the message into an aesthetic arrangement devoid of human meaning?  Does the other ignore the art in favor of the message?  Politically-based art like this concerns me, I’m concerned about the aestheticization of atrocity; the making of the humanly horrific, into the artistic sublime. That’s not to say that art should be devoid of the horrors of reality, only that those horrors (in my opinion) should never be completely abstracted into art.

What responsibility does the artist have beyond the gallery?  In reality, of course, none.  But on a more personal level, is there an obligation to do more than record footage and arrange it theatrically in a gallery?  If Kanwar is going to show me this brutal reality, complete with a scrapbook of news clippings, periodically updated, is that all I should expect from him?

The uncomfortable question that I’ve been avoiding, of course, is what is my responsibility?  In way, asking if that is all Kanwar can do is a way to deflect my own guilt for not doing anything.  In my own community there is a large and growing number of Burmese refugees. And while I happily eat at Burmese-owned restaurants and shop at their grocery stores, am I really doing anything to help or taking any initiative to learn more?  No.  Not really.  That in no small way influences my response to Torn First Pages.  Kanwar’s own frustration about realizing how little he knew about this conflict was reflected in mine.

So I left the gallery with a new resolve to do something, or at the very least to become less ignorant about the topic, and immediately found myself distracted and pulled away into aesthetic concerns of composition and color by admiring completely unrelated pieces.    The danger of any politically-based art, I suppose, the setting itself can be a distraction.  The partitioned nature of the display a way of putting the emotion, the outrage, the guilt…in a windowless white box, warm, dimly lit and easily distanced from.  The complexity of my first reactions instinctively abstracted into distanced, aesthetic observations on form and content.

And yet this didn’t completely happen with Torn First Pages— not entirely.  The multiple installations, each with its own sub-theme, each with its own emotional current, speaks to the viewer in the language of mass media: text/ official videos/ news clips/ sound bites, mediated through the soft fibers of clean sheets of paper.  There is just enough subjectivity here to keep the messages from being an incitement.  Nothing is quite in focus.  The paper may flutter if someone walks too close– that which we take to be statements of truth are left floating and unstable.  Any fact can be and is interpreted.  One person’s massacre is another regime’s victory.

The multi-channel projection, the integration of media coverage, the use of text alongside moving images, none of theses techniques are new.  How contemporary artists redefine these conventions is typically through content and message.  From personal narratives to political activism, from the surreal to the mundane, anything, it seems, can be the subject of these kinds of installations.  When one enters a gallery and sees the multitude of screens, one never knows what to expect: horror, comedy, boredom, any are just as likely as the other.

While I usually find these works interesting on one level or another, it’s the politically-based ones that typically stay with me the longest.  Not so much because of the message as for what its presentation means to the creation of art.  Good art (in my opinion) is art that makes one feel and think.  It should be troubling, it should undo one’s preconceptions.  Torn First Pages does this, but not so much about the situation in Burma, as about the possibilities of art itself.

Perhaps the mere fact that I was so troubled by the work is evidence of greatness.