I had the ability to travel to the Asia Society in Hong Kong to see their exhibition, Breathing Space– Contemporary Art from Hong Kong.  This is a quick overview of what’s there.

First off, the Asia Society is absolutely beautiful, with stunning views of the city.  It’s located right next to the British Consulate General’s office.  The building’s upper floors have outdoor walkways which gracefully intersect the urban and natural as you look through hanging vines and thick foliage to the bustling city beyond.

The artworks were arranged both indoors and outdoors, encouraging visitors to explore the entire area, stopping to consider particular works against beautiful, natural backdrops.

One of the first artists to capture my attention was Magdalen Wong, and her installation piece, Blanket.  A heavy, grey, woolen blanket is folded on the ground with one corner of the blanket bound by a thick rope.  The other end of the rope is attached to a track suspended below the ceiling of the porch where the work was installed.  Many of the artworks in Breathing Space were sound-based, which made Wong’s nearly silent work even more prescient. 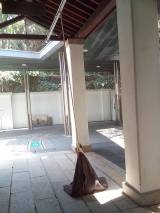 With obvious references to the idea of a “security blanket,” we watch the work quietly and restlessly pace back and forth, worrying the edges of the cloth until they fray.  There’s a statement here about anxiety and movement.  The slow wearing-away of the blanket suggestive of the obsessive ways we wear ourselves down.  We pace through our lives being pushed by unseen winds of obligations and responsibilities, on a track of our social constraints.  And yet the work also seems a bit detached, as though we have some emotional distance from it.  We see the futility of movement, the repetition of it, but we can move away and around it.  In this setting, surrounded by both beautiful modern architecture and luscious greenery, the soft man-made materials of the blanket and rope seem simultaneously organic and artificial.  The delicate, changing folds of the cloth contrast with the hard lines of the floor tiles and pillars, the subtle and unpredictable movement in conflict with the regularity of the building’s contours.  The fragile uncertainty of it was surprisingly moving to me, and this piece stands out as one of my favorites on display.

See Wong’s piece in action and two other works in this video taken on site:

Inside the Chantal Miller Gallery was an engrossing piece of sound-based art by Cheuk Wing Nam (aka: Chang May Wing Joy).  Her work (also seen in the YouTube video above) was entitled Avaritia–Silent Greed, 2015.

In an almost completely dark room, hundreds of recycled wine bottles hung from the ceiling at various heights.  The bottom of each bottle was cut off.  An electric motor was attached via wires to each bottle, and inside the glass bottles are small piece of shells spinning rapidly, striking the sides like a clapper in a bell.  Each bottle emitted a persistent tinkling sound, and hundreds of them together was both musical and chaotic.  It reminded me a little bit of the sound of insects chirping in the night, and indeed the lighting on the lightly colored bits of shell and refuse spinning in the bottles was very reminiscent of moths hitting a window, or fireflies tapping against the inside of a jar.  But the sound was more musical than insects, like small bells being rung to a melody I don’t know, in part of some ritual of which I’m not part.

The sound permeated the entire gallery, even as I walked though to look at other pieces, the constant chiming followed.  It gave the entire exhibition an interesting atmosphere.  In her artist statement on the piece, the artist makes references to moths trying flying into the flame, only to spin endlessly in their clear glass cages.  The fact that the work uses refuse makes a clear commentary on cultural consumerism and wastefulness, how each person, in the pursuit of material wealth, spins around hopelessly trapped the crystal-like confines of our obsessions.

Andio Lai had a different approach to using sound to make us think about our environment.   One piece installed outside the gallery consisted of several small towers with a relay of switches connecting to a tapper and a small light bulb on each one (seen in the video above).  Each switch was connected through an electronic train to the one before it, and all of them were controlled by a “commander” switch.  The signal rippled down the “ranks” of the towers, with each one tapping out its unknown message, sending the signal down, then back up the chain of command.

The piece references the complexities and confusion of communicating in a closed system, how signals get dropped or interrupted, leading to miscommunication.  A commentary on hierarchy and control of information flow is also a meaning that seems pretty clear given the context of Hong Kong’s relationship to mainland China.

Within the Gallery, Lai had a smaller work comprised of 44 Arduino boards with small LED screens which randomly display English words.  The board mounted on the wall is an ever changing poem, surreal and at moments, surprisingly poignant.

Questioning the idea of authorship, Lai is undoubtedly the creator of this piece, but does that make him a poet?  Is this not just an updated version of the Surrealists’ game exquisite corpse?  Only with computer randomizers, any human bias is taken out of the equation.

The words “bus,” “fillet,” and “equilibrium” are all evocative.  And they don’t stop being such just because a computer program selected them instead of an artist.

This work is especially interesting to think about in the context of an art museum, where traditionally the “hand” of the artist and the display of technical mastery over a medium as been the mark of genius and the cause for reverence.  Here, Lai gives us a work that is always original, always being renewed, and never in a predictable way.

South Ho offered some social commentary on the relationship between Hong Kong and the mainland in his works.  In particular Defense and Resistance, 2013. 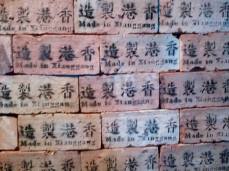 This performance/installation piece featured the artist building a wall around himself with bricks on the bay in Hong Kong.  Symbolizing a desire to protect himself and his identity from the massive influx of mainland Chinese nationals who have flooded into Hong Kong over the past several decades, and from the increasing pressures of the P.R.C. government, which has progressively worn away at Hong Kong’s post-British culture, economy, and legal system to “mainlandize” the island-city.

Not being Chinese or a Hong Konger, I certainly can’t make any comments on the piece from direct experience.  I am fascinated by the potential question the work asks.  What does Hong Kong identity mean?  What does Chinese identity mean?  How much can one defend against the rising tides of change?    There is something definitely futile in the gesture of building a tiny wall around one-self in one of the biggest international commercial harbors in the world.  In the end, the desire to keep one’s place as one remembers it, untouched by outsiders, results, perhaps inevitably, in walling one off from the outside.  Not so much a resistance, but a retreat.  Similar statements were made in the installation works of Siu Wai Hang, also on display, but I plan on addressing his work in a separate article. 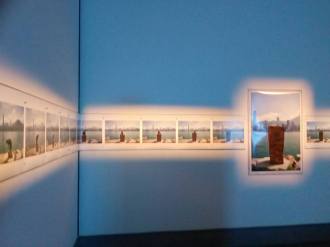 Shutting out the world in an act of defense makes the case for South Ho, while Vaan Ip explores themes of urban claustrophobia in his paintings, Lost City, 2009.  The broad, monochromatic works speak of the repetition of shapes, lights and forms flashing before your eyes as you explore the thick, urban landscape.

After a while even the most distinctive buildings start to look the same through the noise of the city.  A noise captured in part in the work of Chilai Howard, in particular his video installation, Doors, 2008.  The wall sized video displays the facade of an apartment building formerly on Queen’s Pier, near where the artist grew up.  The building has since been demolished as part of the city’s effort to revitalize (read: Gentrify) the area.  The stories of the building are displayed on the wall like registers on an ancient Greek vase, each one telling a story about the inhabitants seen through windows and allowing doors to slam shut behind them. 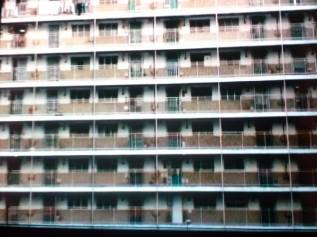 Time speeds up and slows down, not consistently across the screen.  Some rows repeat on a loop, while others crawl in slow motion, the sprawling unity of urban life condensed into a rhythmic display of sound and light.  Community-wide and personal narratives play out on the projection as the audience observes, like passengers on a bus catching a glimpse of other people’s lives as we roll past on the way to rejoin our own.

This quick look only scratched the surface of the amazing work on display at this show.  I highly encourage anyone with the ability to see it to do so.  Questions about place, responsibility, identity and belonging are all addressed in complex and poetic ways by these artists.  I’m grateful I was able to see this exhibition and it was a great introduction to the art scene on my first (but not last) trip to Hong Kong.